As promised in this post, here is an update to all the restraints in the RealRestraint brand to v1.29 !

The highlight of this update is the ability to detach items that are not necessary for a particular lock, and to reattach them later even after the lock has changed. That's what I call "late-detaching" and "late-attaching", in other words "detach after locked" and "attach after locked" respectively. The purpose is double. It is about decreasing the rendering cost of what your avatar by letting you detach what is not needed, and sparing attachment slots at the same time. You can wear 38 attachments at any given time and mesh bodies tend to take a lot of those slots (one for the body, one for the HUD, usually two for the feet and two more for the hands, add one for the head and one for its HUD if you use a mesh head, that's a total of 8 slots just to look good). So any way to spare slots is welcome, especially when wearing full sets of restraints that can take more than 10 slots for some.

For example, if you wear the Vixen cuffs and lock them in "U-binder", like this : 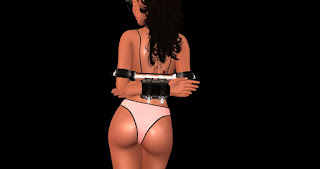 ... you do not need to wear the chain parts nor the left wrist as they're not used by this lock. You can see these parts in "highlight invisible" (Ctrl Alt T), in red : 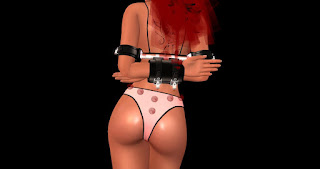 The chain parts are the little spheres around the waist and over the crotch. 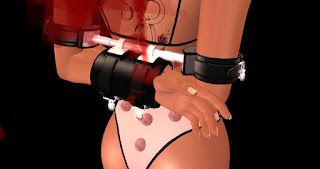 Those parts can be detached even though the cuffs are locked. 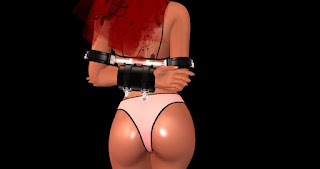 After having detached those unnecessary parts, that's at least 3 attachment slots freed !

Now suppose you have indeed detached those parts and changed the texture from the default black to a mix of pink and white : 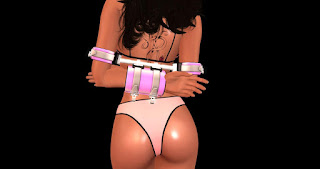 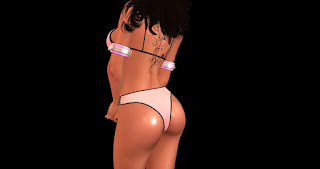 No back chain, no crotch chain... 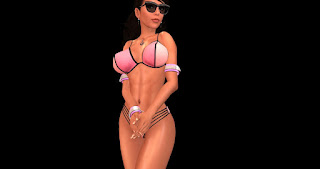 All you have to do is wear those missing parts (and you can detach the u-binder part since it is not used by this lock), the missing cuffs automatically appear, change texture to become white and pink like the rest, and the chains appear, without you having to do anything. And now everything looks fine again : 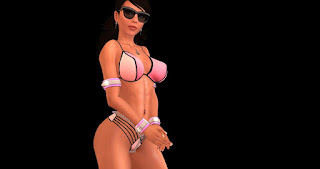 To obtain this result, however, a full replacement of each set is required. Of course this update is not mandatory, and of course any new product bought after the update is live will already be updated. I am very aware of how annoying it is to resize all the parts of a set, which is why I have made the copy/paste shape scripts.

Please note that it is not because a part is invisible that it can be detached. Some parts are invisible and yet necessary for the current lock. For example, the right wrist part of most of the RR sets is where the main scripts are located, so of course this part is always required and therefore RLV-locked. A few other parts are always needed too, such as the light harness and crotchrope of the Siren set, because those two parts may be made visible at any time, regardless of the lock.

Conversely, it is not because a part is visible that it cannot be detached. For example, there has been a popular request for the Vixen and Elegance sets to let the elbow parts show while locked without a pose. I had considered making a Style plugin for them, but this would have been useful only for one particular lock, not very efficient. Instead, I have made it so the elbow parts are visible while on the "Lock" lock, but not RLV-locked. That way you have the choice to wear them or not.


There is another new feature included in this update : the ability for any third-party plugin to register itself to Vulnerable, and be given access to whoever clicks on the restraint while not being the keyholder. Until now only the *Leash, *Outfit and *Sit plugins could be accessed, but now if your third-party plugin has one of its parameters set to "vuln" (case unimportant), then Vulnerable will show it on its menu. Only the name of the plugin will be displayed, not its parameters. For example, if your third-party plugin is named "*MyThirdPartyPlugin.param1.param2.vuln", then Vulnerable will show "MyThirdPartyPlugin" on its menu. I realize as I am writing these lines that there is no "..." after the name to indicate that it opens another menu, but it's ok, that doesn't keep it from working. I'll add the ellipsis in a future update, it is only a cosmetic issue.


Aside from the "late-detaching" and "late-attaching" and the addition to Vulnerable, the update includes a few other changes and fixes, so let me write the whole list of changes here :

* Late-detaching, late-attaching
- Ability to detach any item that is not necessary for the current lock.
- Attaching items that were not worn but necessary for the current lock will automatically synchronize themselves for the textures, tints, leashes and particle chains as soon as they are worn.
- Known issues : The "Pet" pose in Mummy Legs and Deluxe Straps Legs re-locks the arms in "Pony" whenever rezzed (not a real issue, but can be surprising);  Mummy plays a lock sound when rezzed, once again harmless but can be surprising. I will work on those issues later and see if I can fix them, as they area a side-effect of the feature above.

* Vixen and Elegance sets
- Elbow cuffs are now visible on "Lock", but can be detached manually.

* Vixen set
- There was a script error when struggling in "Hogtie Tight", a missing animation (thanks JimHC Lykin)
- The "Black+silver" button in the "Saves" menu of the VixenTex plugin was oddly placed (cosmetic change, but it was annoying).

* Vulnerable plugin
- Any third-party plugin that has "vuln" as one of its parameters (the part between "." in the name, if any) will be on the Vulnerable menu like *Leash, *Outfit and *Sit.

* Deluxe Gag & Blindfold
- Removed the "bridge" script that made textures be changed on both items at the same time, as it would cause issues when applying a preset (the item the preset is applied to would look fine, but the other one would look only partly textured, due to SL throttling the messages, as there are so many).

* Deluxe Straps legs
- For some reason the waist part was no-mod. I'm surprised nobody called me about it. Of course if your waist strap is no-mod and you don't want to update just for that, send me an IM and I will give you a mod one.


Please note : The following products do not benefit from this update as they either do not have secondary items or their secondary items are always used. So no need to update these if you don't want to.

I repeat, this update is in no way mandatory, it is just a convenience for you if you need to free some attachment slots when you are heavily bound, or if you are concerned with your own avatar rendering cost.

Posted by Marine Kelley at 2:30 AM