Update to the gags

Yet another update to the RealRestraint gags, because why not ?

Actually this one was a bit overdue as there were two bugs I had to fix, and should have fixed sooner than this. Sorry for the wait.

1. The first bug was the Deluxe Gag's chin strap (and its sibling the Deluxe Bridle's chin strap) moving all by itself in laggy areas. As I have explained in this post, the OpenMouth plugin regularly opens the mouth of the system avatar plus plays one Bento animation according to the one the user chose. In the meantime, the chin strap monitors the state of the system mouth and resizes itself accordingly. In very laggy areas, it could lead to issues so I increased a delay in the chin strap script and it seems to have done the trick.

2. The second bug was simply the way the Bento animations were made, well most of them. I made those animations the regular way (they are not animations in fact, just poses), with one keyframe at the beginning and that's it. It just so happens this doesn't work well for some mesh heads. It works for Lelutka, but not for Catwa and Logo for instance, the latter would keep its mouth open when ungagged. Worse, some animations would even deform the head. So I redid them all the same way Keiyra made her OpenMouth/Big/VeryBig animations (which work just fine), now those mesh heads should stop acting up when a gag is unlocked. As a bonus, I have removed the gaunt from all the animations, because it wasn't terribly needed after all. I had made that gaunt so that the strap of a gag would look like digging into the cheeks, but it didn't look good on most people, so it is removed now.

3. As a bonus, I have also slightly modified the OpenMouth plugin so that it displays aliases for the overrides instead of the names of the animations directly. So you will see "Normal" instead of "OpenMouth", "Big" instead of "OpenMouthBig" etc. Its notecard changes accordingly and I will explain below how to get this change without having to replace your gags, because this requires to modify a notecard.


How and what to update

The gags that are impacted by this update are :

As to how to update to get those bugs fixed, this can be little tricky. Please bear with me while I explain.


1. Fix number 1 (the chin strap) requires you to just update your Deluxe Gag, but it won't do anything to fix the Deluxe Bridle as it is a secondary item like a left wrist cuff, the updater does not modify those during a normal update. You will therefore need to fix it yourself. Here is the procedure :

* First make sure you have the update folder in your inventory. You get one by clicking on the updater at one of the locations shown at the end of this post. This folder contains the DeluxeGagChinStrap script mentioned above. 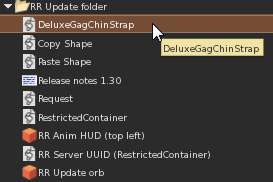 * Res your bridle on the ground and edit it, then go to the Content tab. 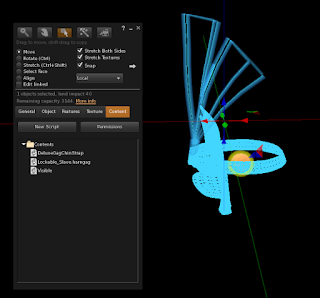 * Delete the DeluxeGagChinStrap script from the bridle, and nothing else. 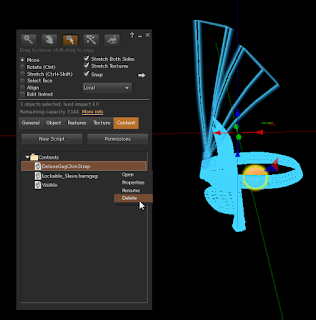 * Drag the DeluxeGagChinStrap script from the folder in your inventory, drop it into the contents of the bridle.

* You're done, no need to reset. Pick up your bridle and it is ready to use. However you will need to reposition the chin strap again once it's locked, since the old script has disappeared with its memory.


3. Fix number three cannot be fixed with a normal update, it has to either be a replacement, or a manual fix. Here is how to fix it :

* First update your gag normally, worn or not this won't make any difference (except the updater will complain it cannot download animations, but ignore that, the OpenMouth plugin will be updated anyway).
* Edit your gag, go to the Content tab, which displays all the items contained in it (animations, scripts etc) : 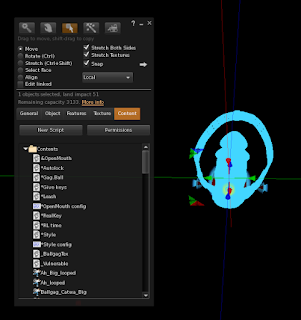 * Double-click on the "*OpenMouth config" notecard to open it : 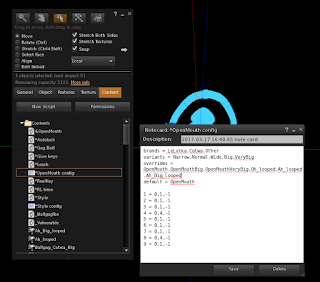 * Between the lines "overrides" and "default", insert the following line : 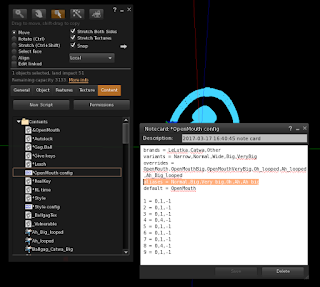 * Save the notecard, close it then stop editing. 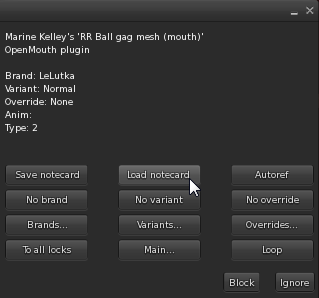 * That's it, the "Overrides" menu should now show readable and meaningful aliases rather than the names of the animations directly, which were too long for the buttons : 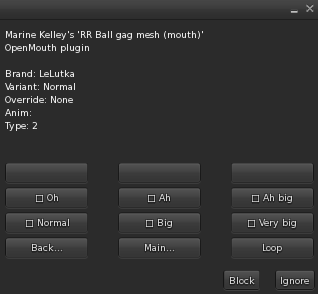 * Go to one of the locations shown below.
* Click on the updater there, you receive an update folder.
* Rez the update orb contained in that folder.
* Rez one of your gags on the ground.
* Click on it, go to "Tools", press "Save", then "Update".
* Wait.
* Wait some more.
* It can be long.
* Are we there yet ?
* Oh, it's done ? Fantastic.
* Click on your gag again, go to "Tools", press "Load" so your times are restored.
* If you want to do the fix #3 (the aliases), edit your gag, open the notecard as explained above.
* Pick up your gag, rez another one, start over at step 4.

Marine
Posted by Marine Kelley at 9:12 AM