The Bubblizer is a game that can be seen as soccer or dodgeball, with a streak of kink, a lot of shine and a good dose of bondage.

It is a game for between 2 and 32 players, with between 1 and 40 balls, or bubbles, in an arena that spans from 8x8 m to 32x32 m wide. Whether the goals are rezzed or not, the game would be either a soccer game or a dodgeball game respectively.

In dodgeball mode, players aim at other players when kicking the bubbles, while in soccer mode they aim at their goals, that they are trying to defend.


Before we go further, take a look at a few pictures : 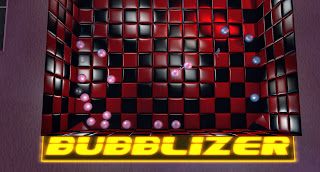 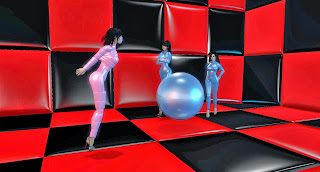 It is hard to play soccer when your opponents keep adding restraints on you ! 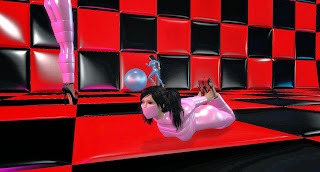 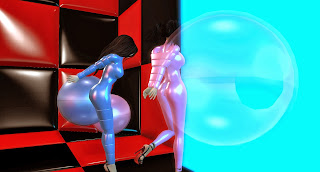 The pink team is getting their revenge ! 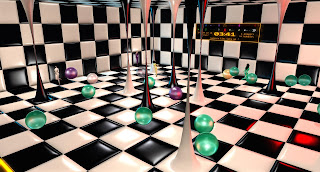 If you want real chaos, try a free-for-all !


As you can see, the players are wearing shiny catsuits and restraints. They are both provided for free by the game. The restraints are mesh and can be resized easily.


The rules of the game are simple :

- If you find a transparent bubble, bump into it to make it yours.

- If you see a player you can kick this bubble to, do it.

- If someone kicks an enemy bubble towards you, run !

- If you manage to hit a player (or their goal) with your bubble, you score and you can choose to restrain them or to remove a restraint from yourself.

- Choose the restraints wisely, for each restraint has its own effect. Putting the right restraint at the right time may turn the tables in your favor !

- After the end of the game, the player who scored the most wins and gets unbound. The rest of the players stay in bondage, and their restraints are available to all (except themselves and the other losers, of course).


This is simple, but there are many things the players can do to achieve a leading position. They can grab and toss the bubbles, they can make a bubble of theirs "contaminate" or absorb another one by making it bump into it, they can pop enemy bubbles... a lot of tactics and strategies are available in order to prevail on the field.

Attention : The game can take up to 100 prims in Land Impact when you choose to rez the bumps, the columns, the goals, the biggest arena with the highest number of bubbles. A standard game, let's say a 10x10 field with 20 bubbles, will take 50 prims in Land Impact. When idle (everything derezzed), the Bubblizer takes only 1 prim in Land Impact and has a script time usage of 0.002 ms (the lowest a script can do).


You can find the Bubblizer in any of the Marine's Goodies vendors. There are not many among the grid so here are the known locations : 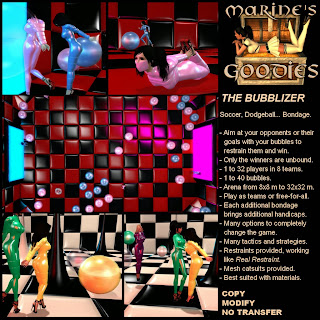 The product costs L$1000, and is copy/no-transfer.


PS : If you want to give the Bubblizer a try before buying, you can find one in Bondage City : click on the teleporter near you when you arrive, and choose "Bubblizer Field" on the menu, then sit on the ball that appears to TP there.

Update to v1014 :
* Added : The field derezzes after an hour of inactivity, to return to its idle state with only the platform.

* Changed : The column obstacle is entirely redone in mesh with a simpler physical shape that feels closer to its visual shape. The old one was a torus with a convex hull (hence a cylinder). As a result, the prim count is a higher than before, the set of columns for the 16x16 field takes 15 prims instead of 7. I couldn't go lower than that without simplifying the visual shape too much.

* Changed : The lights, which are part of the field, are physical and in consequence may disturb the trajectory of a bubble. I have moved them outside the field, one meter back exactly.

* Added : I included the French translation (courtesy of Florensse Resident) in the box.

Update to v1014 : This update contains mostly bug fixes, no new stuff.
* Changed : Increased the range of tossing a bubble from 2 m to 4 m around the player.
* Changed : Make it so the lifespan of a bubble is calculated from its latest collision or touch.
* Fixed : Don't let a restraint go over level 3 (it could happen when two players restrained a third one at the same time).
* Fixed : Don't let an opponent grab and stop your bubbles. This implied reviewing the whole logic of grabbing and tossing a bubble.
* Fixed : Make it so only immobile or very slow bubbles can be grabbed. You can still stop your own bubbles in mid flight by clicking on them.


Update to v1013 :
* Added a "Join/leave" button to the menu of the attachment, to join or leave the nearest server. This is useful if the player is bound too tightly to be able to touch the scoreboard to join or leave the next game.
* Added a male version of the catsuit. Don't wear both catsuits at the same time, it would look strange !
* Made the wrinkles on the elbows of the catsuits look better.
* Added a pattern to the catsuits. This pattern is black but turns white if the catsuit is too dark (i.e. when it is green, red, black or purple).
* Made the green team darker.
* Sharpened the skin texture of the catsuits.
* Made sure the resizing mode is turned off when the game starts.
* Prevent the restraints from working if RLV is deactivated.

Update to v1012 : This update is merely about making the Bubblizer rez its objects correctly independently of its rotation around the Z axis. Normally the scoreboard should face an avatar who is standing on the "BUBBLIZER" logo on the platform.

* Fixed the rezzing bug, which would prevent some objects from derezzing when someone TPs in or out of the sim (due to a strange race condition that does not occur under normal circumstances).
* Switch the bubble's physics envelope to "convex hull" so that it does really take only 1 prim per bubble and not 23. I'm sorry, I should have seen that sooner. And now the bubble/bubble collision box is even better than before, I think.
* Prevent from grabbing enemy bubbles (I really thought that was the case before, but no).
* Keep a bubble harmless while it is grabbed, even if it is owned. That way you can't grab and drag a bubble into a player or a goal, that would be too easy.
* Don't allow tossing a bubble if it is further than 1 m away from the player when releasing the mouse button. That way you can't toss just any bubble on the field in any direction, and you can't toss bubbles at very high speeds either.
* Reinitialize the game immediately after the end, but keep the score showing on the scoreboard (the teams are emptied, though).
* Move the scoreboard a tad bit further inside the arena so it doesn't flicker when seen from afar at shallow angles.
* Hide the teams that do not have any players on the scoreboard for better readability.
* Don't say the scores on the chat when simply shutting the Bubblizer down while no game is playing.
* When shutting the Bubblizer down, release everybody except those who have already lost.
* Reduce the darkness of the nipples on the catsuit.
* Add very short rules in the "Bubble restraint" notecard, before the pictures, so that new players will know what to do even without reading further.

* Added complete rules in the restraints folder, grouped in several pictures for a better readability.
* Added a short text on the platform itself, to explain what to do to get the menu.
* Added a short text on the scoreboard when rezzed, to explain where to click to get the gear.
* When the game ends, the scores are shown on the chat as well, both per team and per individual player.
* The game keeps the players registered for 3 minutes after the end instead of 1 minute.
* When nobody wins, everybody is released instead of just the pink team.
* Added an option to ignore restraints during the game (but the losers do get restrained after the end). When hitting a player or a goal, the player doesn't get a menu and scores immediately instead.
* Changed the visibility of the cuffs, they should not appear when the arms are bound tightly anymore.* Improved the menu on the game, duplicated the "Dodgeball/Soccer" switch to two of the pages for better usability and logic.
* Improved the menu on the restraints by adding the current status of the target.

Click on the small arrow on the scoreboard to request an update (owner only).
Posted by Marine Kelley at 6:44 AM