A new brand and a new item !

Over the years I have been working on many projects in SL. Some very much on the kinky side, like restraints, others totally different. Among the restraints, some were (in my opinion) good enough to share with others, and that's the reason why I have created the RealRestraint brand. However I never got to share some of my other projects with the community, because they were so far away from my main business that I was afraid of confusing my customers.

But I have a lot to share... Some of my private projects are, I think, good enough to be enjoyed by others and although I know they won't be as mainstream as my restraints, it would be a shame to keep them for myself :)

For now there is only one item to sell in this brand, a HUD that is meant to be used by ponygirls/ponyboys and their trainers. It is very versatile, a trainer can command as many ponies as they want, even with other teams around, it is very resistant to lag, and a pony can even use this HUD while blind ! Have you ever tried to pull a cart while blind, without hitting a wall ? I know a few ponies who are good at that now, thanks to this HUD :)

Several friends of mine have been nagging me for over a year to release it, so here it is ! 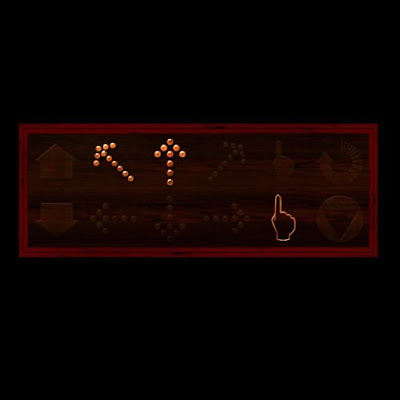 For now there are only two vendors in this new brand. One is at my shop in Pak, the other one is at the Little Shop of Kink, in Lineside. If it works well, I will add vendors across the grid.

Posted by Marine Kelley at 7:57 AM

Here is the latest version of the RLV, no new features this time but an updated codebase and a few bug fixes. The change I like the most in the new codebase is being able to focus on any object without having this "zoom effect" we've had for years. You can now focus on a hollow prim at will.

This new codebase also added a "feature" that I personally disliked very much, and therefore changed back to how it was before : the Build window used to have a drop-down list that would allow you to change the way objects were moved and rotated : World/Local/Reference/Screen/Attachment. It was VERY useful for a builder and I used it like all the time. I don't know why, but Linden Lab moved this list box to an annex window (the "Build Options" one). However this window is meant to be used only once in a while, now the SL viewer requires a builder to have it open at all times. It eats more screen real estate and makes you click more, for no gain. Worse, this list box was replaced by the "Link" and "Unlink" buttons... Imagine clicking on "Unlink" by mistake, it would destroy your object with no undo available.

So I removed those two buttons and re-added the list box and I'm a happy builder again.

Aside from that, here are the bug fixes :

- fixed : The Windlight shared region settings added by LL to the viewer recently introduced a way around the prevention against changing environment settings.

- fixed : @getinvworn would sometimes give weird results when a single no-mod item was under a folder which name did not begin with "."

- fixed : When prevented from seeing the location, right-clicking on the ground (Linden land not a prim ground) would make the viewer slow down to a crawl, eventually crashing. Same thing when trying to open the "About Land" window.

I am proud to announce the release of a new product in the RealRestraint brand : the Jammer !

Unlike the other products of my brand, this one is not really a restraint. It is... far worse. Those who heard about the Banishment Program know that I am very interested in all kinds of behavioral control devices in SL, and the Jammer is the result of my research.

Out of the box, it looks like a mundane bluetooth headset, that everyone owns nowadays. 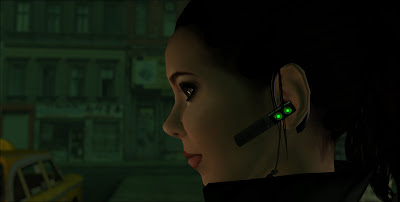 But make no mistake ! This is not at all what it is meant for. Under this disguise lie a few high-tech, low power control devices :

- Headphones : Filling the wearer's ears and employing active noise cancellation, they completely suppress the hearing while acting like actual earphones.

- Vocal chords suppressor : Pressed against the wearer's trachea, this small device issues active noise cancellation as well to suppress any sound coming from the wearer's throat, effectively muting her. It also contains a mic, in order to record what was going to be said and send it to the central unit.

- Contact lenses : Applied directly on the eyes, they react to the radio signals sent by the central unit, and polarize themselves accordingly, effectively blinding the wearer when needed.

- Speaker : Disguised into the microphone part of the headset, it is used to speak on behalf of the wearer, using advanced voice morphing technology to perfectly imitate the wearer's voice. It also contains an actual microphone that hears what is said within chat range.

- Central unit : This is the nexus of the system, it is embedded inside the plastic part of the device. It comprises several sub-units :
- A radar to detect who is around
- An antenna to communicate with the Dominant's remote
- A very high frequency, very low power radio emitter to control the opacity of the contact lenses
- A central micro-processor to execute the program uploaded by the Dominant


With this device and the remote control that goes with it, you, as the Dominant, are able to control what your sub says, what she hears, what she sees, you can even speak through her device and hear the chat around her. Or limit the amount of chat she says, suppress it, censor it, or even censor what she hears, making her hear totally different things...

And last but not least, you can actually program her like a computer ! The Jammer has its own programming language that is flexible enough to give you plenty of leverage over your sub, and have her behave at all times, even when you are not around. With this programming language, you can automatically replace words that she says or hears, force her to say the things you want, report to you according to your wishes, and even trigger animations and sounds (that you upload from the remote control).

In the remote you find several predefined programmings, like one for a slave (not being able to speak unless spoken to first, being forced to say "Master" or "Mistress" when talking after you, etc), one for a ponygirl (not being able to understand human language, only common gestures), one for a puppygirl (being made to bark and overall act like an animal), one for a doll (obsessed with sex, eager to serve her owner) and one for a drone (acting like a robot, having her brain washed, being unable to even speak, only obey). Of course these are just examples, you can modifiy them and write your own programmings at will, without limit. You can even share them with fellow Dominants, since they are just contained in notecards.

You also find a few full-perms sounds and aninms (the famous "nadu" for example, but also some custom anims like a "girl in pain" one) that you can upload into the Jammer, and force your sub to play.


Now... Before you get all excited, know that this device is VERY complex stuff. The manual is big and divided in three parts :

- If you are just a casual user, you will have fun with its basic features such as acting like a renamer, limiting and suppressing the speech and hearing, and speaking and hearing through the sub.

- If you are more serious about it, you will learn through an extensive tutorial how to write a program for the Jammer and how to upload it. Mostly for its speech control features.

- And if you are an actual programmer in RL (or even just a scripter in SL), i.e. you have the mindset of a developer, you will enjoy reading the expert part of the manual, that details all the intricacies and features of the language itself, telling you how you need to know to come up with full-fledged programs.


In other words, into the right hands this device can prove to be very powerful. Mwahaha !


Have fun with this new weapon !
Marine
Posted by Marine Kelley at 3:14 AM