Upcoming update for the Police Handcuffs

I normally don't do that but I want to talk about what I'm working on right now, the update to my oldest commercial product in SL : the Police Handcuffs (and Elbow cuffs, and Legirons, and Prisoner Belt).

It is necessary to tell you that in advance because there will be a change in price, which will go up a tad (not much). Ok, so that's two things I generally don't do for other products.

If you want a summed up version, the price goes up from 870L to 950L and the four sets become only one set (but you're free to contact me if you want to buy only a part of it). However, if you already own the full Police set, you'll be entitled to a full update. If you own the wrists and elbows, you'll be entitled to the arms part of the set. If you own the legirons, you'll get the legs part of the set. The update will be free, of course.


Before going further, I am talking about these four products : 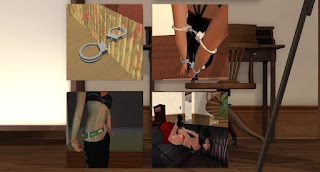 They are so old that they are made with prims, sculpties didn't exist at that time, let alone mesh. It shows on the box pictures that I kept the same from day one, nearly 12 years ago (I released the Police Handcuffs in January 2007, the rest followed shortly after). Old doesn't mean outdated though, I kept updating their scripts and animations over the years, as you know, but I felt they needed some love. So I am redesigning them in mesh.

And since they are one of my best sellers, they are actually getting a lot of love. It's not a redesign, it is a complete rework. 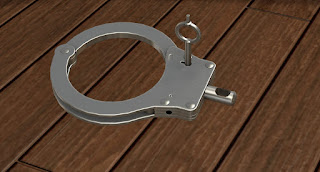 Nickel plating with some dirt and worn edges 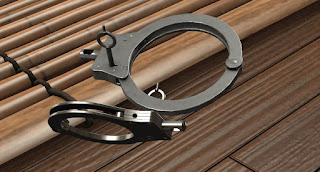 
Nickel, shiny steel and dirty steel are only three of the 16 materials I have made for these cuffs.


But here's the thing. I always thought the Police set was too expensive. It costs 870L in total : 250L for the handcuffs, 250L for the legirons, 150L for the elbow cuffs and 220L for the prisoner belt.

It was fine back then when the stipend was 400L a week, but now that it is 300L a week, the price is a little too high. Plus, the Restrained Elegance set costs 700L and it has more features since it has a collar. More over, the Police set requires some actions on the user's part to install the two addons (elbows and belt) into the right wrist cuff and people don't really like to have to work to install something they just bought, they just want to play.

So something had to be done.

Firstly, enough with the "pay for an addon and install it yourself" stuff. I know it's a pain for you, and you have to do it every time you replace your handcuffs. I did it that way to avoid forcing a sale, because if all you want is a pair of handcuffs to go on your wrists, why pay for elbows and belt, right ? If you liked the handcuffs so much that you wanted to expand, you would pay for the elbows usually and install them. It's not complicated but it's still work to do on your part.

Secondly, the prisoner belt is underwhelming now, and I think clashes with the metal design of the cuffs. I want to turn it into a simple chain with a padlock and integrate it with the rest of the arms animations for a full metal look. But if I turn the belt into a chain, do I include the two belt animations with it ? Or what ?

Thirdly, there's that vertical chain going from the wrists to the ankles. It is made with particles and it is impossible to link a particle chain from the point in the middle of the ankles regardless of the animation. I did a little script back then to move said point (which is part of the right ankle cuff) depending on whether you are standing or sitting, but it's not ideal. It is also impossible to spawn the particle chain from a rigged attachment (or rather, it will spawn from its true position, not from its visual one) so I want to get rid of the particles altogether, and make rigged chains instead. The solution I have found works pretty well, I'm not talking about it yet though because I could still change tactics. But for now, the whole set will use mesh chains, some rigged and some unrigged.


This all leads me to want to make a full set instead of a set with addons. It makes it easier for you, but also for my updater (which has to account for 4 different combinations of arms cuffs for now : wrists, wrists+elbows, wrists+belt, wrists+elbows+belt).


But here lies the problem. If I'm redoing the whole set and make it a full set of arms+legs+belt, the set would cost something like 250L for the wrists, 150L for the elbows (which come with the wrists so 400L for the arms in total), 250L for the ankles and... 220L for the belt ? A simple chain with two animations ? That's where the math doesn't work. 870L for a set that does not feature a collar, while the Restrained Elegance set costs 700L and has a collar, it just doesn't make sense.

I don't want to lower the price for two reasons. First, if you already bought the full set of cuffs, you don't really want your product to lower in price afterwards (notice I don't write "value", as price and value are two entirely different things). You might expect it, but I'm against that practice in general. Second, well, I'm working hard updating those cuffs, this is a project that takes weeks, full time. I don't see why I should be paid less for updating a product for free while I could work on other projects that bring more money.


So this means that the set needs more value added, and that's were comes... a collar. A shock collar, to be exact, but there will be a Spy plugin in it as well. I am still working on it, here it is in SL with a nickel plating, untextured wires and some text on the front LCD : 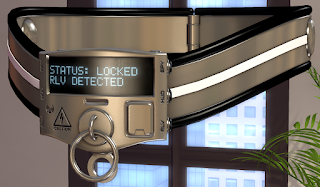 The white lines in the middle are wires going to the side electrodes that touch the captive's neck. The shock plugin will trigger animations (already done and looking good) and sounds, and will probably show a glowing and scrolling texture on the wires to show that energy is flowing through. All this is still on paper, I haven't begun working on the plugin yet. The collar will also probably contain the Spy plugin, like the Elegance, Serious and Vixen collars.

I've made the collar look institutional, keeping in mind that if a prison used such a device, it would have to be difficult to tamper with, robust, light but also not allow the prisoner to hang themselves with it, nor be used as a weapon should it be forced open somehow. That's why it is made with rigid metal instead of a flexible belt and does not have any sharp edges. Also it should not be able to be locked without the key, but RealRestraint scripts do allow it so don't be surprised by that :)


In my mind, the collar replaces the old prisoner belt (which becomes a simple chain, if I include it at all), but since it has more features than the Elegance collar (which does not have a shock device), it should be more expensive, right ?

So this leads me to increase the price a little bit and to make the Police set a single product with three sets in it : arms, legs and collar, exactly like the Vixen, Serious and Elegance sets.

The pricing will be this :

* Wrists+Elbows+Belt : 400L. To get this set with a replacement, you will need to own the wrists+elbows Police cuffs.

* Legs : 250L. To get them with a replacement, you just need to own the Police Legirons.

* Collar : 300L. To get it, you need to own the wrists+belt Police cuffs (it works if you also have the elbows of course, but you must own at least the wrists and belt). I don't think it should cost only 220L though, and this is the reason for the slight price increase.

Update : The collar will be priced at 300L instead of 250L, because of the zapper plugin and its animations and effects, because of the overall features of the collar and because there are other shock collars on the market and I don't want to dramatically undercut their own prices.


Of course, the updates with replacement work only if you have already installed the addons, for example the belt, into the right wrist cuff, turning it into a wrists+elbows, a wrists+belt or a wrists+elbows+belt combo. You won't get the collar if you just bought the belt without the wrists, or if you bought both but did not install the belt.


Please keep in mind that this update is not available yet, and I don't know when it will be, I can't give an ETA, so please don't IM me asking when it will be ready. It is a lot of work, and I'm adding some as I go to make sure the Police set is as good as I think it should be. After all, this is my very first product and the very reason why I opened a business in SL, so it is normal that I take my time.

But this post is to tell you that if you want to get the full set when it's out, knowing that I will discontinue the four Police products and replace them with this one, upping the price a little in the process (for good reason as you saw above), you better buy the Police cuffs and their addons now to pay the old price rather than the new one.

Lastly, be assured that I will not make a habit of upping the price when I update stuff, even when I add more content and features. That's not how I work. To me, a product should stay updated over time or decrease in price as it gets left behind by other, more up-to-todays-standards products (from the same creator or from competitors). My updates may be free, but I benefit from them indirectly by the exposition they bring, and by keeping my products up to date. This update here is an exception because I am modifying the set itself, both in looks and in function, removing a part and adding another (hopefully better) one to replace it, and finally adjusting the price to be more in line with my other products.


Update : Some people really liked the ability of just buying a pair of good cuffs for the low price of 250L, knowing that they could upgrade later if they so chose. I knew making this product modular was not such a bad idea after all. So I think I will make a special "basic" version of the arms cuffs containing only the wrists and their animations, and an "elbow" addon just like before, and sell them for 250L and 150L respectively. The other parts (legs and collar) will likely be sold separately as they are independent products after all.

Another update : I just want to add some juicy screenshots of the nearly finished Police set :) 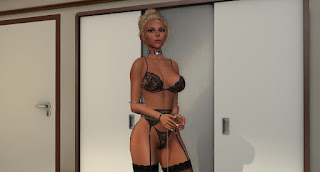 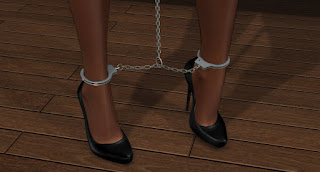 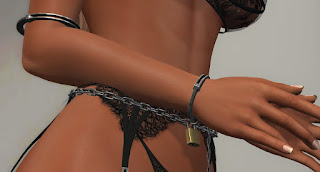 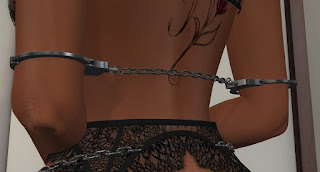 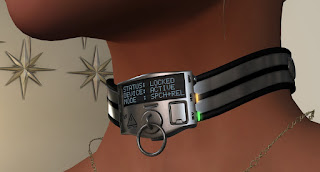 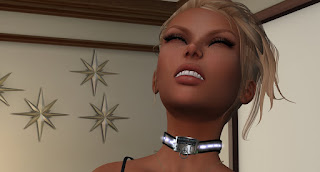 Posted by Marine Kelley at 4:31 AM