Ok I know I have just released RLV 2.8, but two things were still bugging me, so here they are, fixed :

Since the second bugfix implied changing the response to @getstatus[all], I have to bump the version of the RLV API to 2.8.1 as well. That's the only change, but the way it was done under 2.8 wasn't intuitive and could lead to more work for the scripter. Now a @getstatusall:;#=2222 will respond #showinv#showworldmap#showminimap (for example) instead of /showinv#showworldmap#showminimap.

Sorry for the inconvenience,
Marine
Posted by Marine Kelley at 12:27 PM

So here it is, after many promises, the new RLV with a blacklist to ignore some RLV commands !

I know, I'm a little late. Hehe. Anyway here it is. Along with many other bugfixes, just see for yourself :

- added : RLV_18 : Implement blacklist :
- RestrainedLoveBlacklist debug setting as a comma-separated list of tokens. Adding "%f" after a token indicates that we are blacklisting the "=force" variant instead of the "=n" one.
- @getblacklist[:partial_name]=2222 to retrieve a comma separated list of blacklisted commands
- @getblacklist in IM to act like @version.
- @versionnumbl=2222 to retrieve both the version and the blacklist.

- changed : Re-establish fully opaque windows, since now we can control their transparencies through the preferences.

- fixed : "@detach=n" on a child prim did not always make the whole object undetachable.

- fixed : @attachallthis doesn't work with folder which name begins with "~", even under another folder (Thank you Sassy Romano for the report).

Some of the changes involve new RLV commands (namely @getblacklist, @versionnumbl and @getstatus[all]), so the API will change version as well, to 2.8.

I've been busy fixing bugs lately... and here is the result !

- changed : Radar hides information when the People window is too small, to improve readability.

- changed : Remove the "Block" button on scripts dialog, it was too easy to click on it by mistake.

- fixed : Empty tokens in RLV commands ("@showloc=n,,showinv=n", "@showloc=n,") would raise a "failed command" alert, yet execute the command anyway (thank you Mo Noel for the report !)

- fixed : Information button on the top menu bar wasn't doing anything anymore, now it shows the Place Profile window again, like on the navigation bar and the mini-location bar.

- known issue : Payment notification text is totally off, as a result of the change to the placement of the buttons in the script dialogs.


You can grab the viewer here :
http://www.erestraint.com/realrestraint

So I have added a shortcut to restart all the animations (I use this a lot so a shortcut is necessary), but I didn't realize this was used for "select all", AND it would not allow you to select all the text... Sorry about that !

So here is RLV 2.7.4.1, with the shortcut changed to Control+Alt+Shift+A, with my apologies :)

This is it ! RLV has switched to SL 3.x, this means the sidebar is gone, and we are back to individual windows, like in v1.x ! And naturally this required a lot of adapting and tweaking, that's why I took so long before releasing this version.

You will notice quite a few changes compared to v2.x, but you should quickly find your marks again. The most noticeable changes are the sidebar that is no longer in the viewer, and the notification area that has shifted to the upper right corner of the screen, just like in v1.

Oh wait... This actually creates a big problem, at least for me. You see, I am used to clicking on the same buttons on the same scripts (namely mine), and with time I have grown to predict their position on the screen, even before they appear. This makes me a lot more productive, and it has been so since day one. Let's do a little history here :

In SL v1.x, script dialogs were on the upper right corner of the screen, and were bright blue. There was some text in a fixed size area, possibly with a scrollbar, and then the buttons that you pressed to dialog with the script. 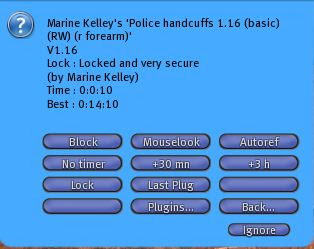 In SL v2.x, these dialogs have moved to a notification area, which is on the lower right corner of the screen. And this time, the text would be a variable size area, but still above the buttons so it wouldn't matter, the buttons would always be at the same spot. Best of both worlds : buttons always at the same position, and no more scrollbar to hide the text. 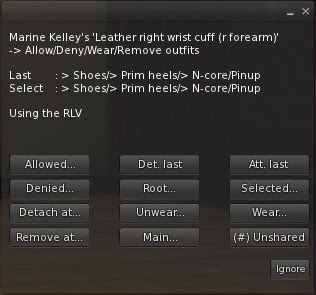 But now, in SL v.3, the script dialogs are back to the upper right corner, this is all well and good but there is still no scrollbar. Which means the buttons (that follow after the text, which is still a variable size area) would appear... just anywhere on the screen, depending on how much text there is to display ! Eek ! That's unacceptable if you ask me.

That's why for this version and probably onwards, I have inverted the text and the buttons. The buttons appear above the text instead of below. It takes a little time to get used to, but it works since they are now always at the same spot. It creates an issue, though : some notifications are totally off. I will be working on it, but it is less easy than it seems and I really want to release this version now. 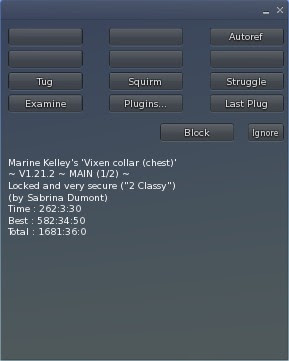 And now, on to the other good stuff :

- added : Ctrl+A keyboard shortcut will do a "Me" > "Movement" > "Restart All Animations".

- changed : Now @showloc will also hide the coordinates, not only the parcel and the region. Thank you Chorazin Allen for the suggestion !

- changed : Chat history window is optimized, and the "Google translate" checkbox is removed (for now, but if too many people use it I will put it back).

- changed : in v3.x, the SL viewer shows notifications (IMs, script dialogs etc) on the upper right corner of the screen. This seriously messes up the placement of the buttons on script dialogs, as their positions are not predictable anymore. Therefore I swapped the buttons with the text, and the buttons now appear above the text.

- changed : Chat bar disappears when losing focus, if the chat history is hidden and if "CloseChatOnReturn" is set to TRUE in the debug settings. Chat toasts are also moved slightly higher up so that the chat bar does not hide them.

- changed : Reduced the minimum size of most used windows (inventory, appearance, people, places), as well as the size of the tabs on these windows.

- fixed : "Use region settings" switched back to the latest customized Windlight settings, instead of the default region settings. Thank you Lance Corrimal for the heads-up !

- fixed : Sending a TP offer would behave wrongly if one of the people who were sent the TP offer was an exception to the @sendim restriction. Thank you Lance Corrimal for the fix !

- fixed : Some Windlight settings were wrongly set through RLV commands (namely all the "intensity" values). Thank you Henri Beauchamp for the fix !

- known issue : Payment notification text is totally off, as a result of the change to the placement of the buttons in the script dialogs.


You can grab the viewer here :
http://www.erestraint.com/realrestraint