I must apologize, Linden Lab has released their Viewer Managed Marketplace and Experience Tools and I integrated them into the RLV... and totally forgot to release it (I wanted to give it a few days of testing but I was also busy developing the Highbinder at the same time, see my previous post).

Since then, LL also released several fixes for crashes and other annoying behaviors in the viewer (like double-clicking failing randomly... oh god that one was irritating).

But there is another enhancement that was integrated into other TPVs (Firestorm included) that I wanted to test in the RLV too : the increase of the maximum video memory in order to avoid "texture thrashing" (when the textures become blurry repeatedly due to a shortage of video memory, due to the viewer having to downsize some textures randomly in order to avoid letting the video card run out of memory and crash the viewer). Until now you had two options to avoid texture thrashing : either you'd reduce your view range dramatically, or you'd set TextureLoadFullRes to TRUE in the Debug Settings (that's what I did, otherwise forget about taking good snapshots in SL), but the latter slows your viewer down.

This was due to the viewer being limited to 512 MB video memory, but now most medium to high-end video cards have much more memory than that. 1 GB, 2 GB, 4 GB, 6 GB and more ! So I increased the limit on the RLV as well to 2 GB, which is enough without hitting the 32-bit / 64-bit issue.


Problem is, you don't max out your video memory without knowing what you're doing, otherwise not only you'll get texture thrashing, but it will even be worse !

So here is how you do that properly :

Display your Texture Console with Ctrl+Shift+3 (it is debug text superimposed to your 3D view) : 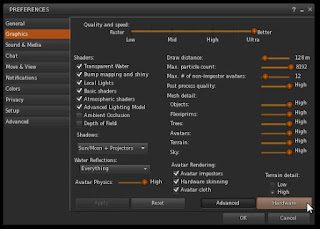 You get this window :

Now move the "Texture Memory (MB)" slider value while keeping an eye on the "GL Tot" field of the Texture Console (that's the very first field). Notice how the second part of that field changes as you change the position of the cursor on your slider :

You must move the cursor to a value that makes that "GL Tot" field be JUST under your card's maximum video memory, but not higher. Here are a few values for you if you don't want to search yourself :

That's it ! With those values, you should not get texture thrashing anymore if your video memory is high enough.

You can grab the RLV for Windows here :