After an important update to RemVision, I worked on it a little more to add some interesting features both to the RemVision plugin and to the Earpieces plugin.

Before going further, please be aware that to get this update, you need to request a replacement to the updater. Yes I know, again. This is because the screen has been updated too. However, even if you get a replacement, you can still use the old unrigged lenses (if you need to) because they didn't change at all, so no resizing necessary here.

Changes to the RemVision plugin

First of all, the bad news. Since the RemVision plugin was already very big, and since I wanted to add new features, I had to remove Unicode support. In plain English, that means instead of fancy squares and round buttons on the menu, you get "( )" and "(#)" like in other plugins. Unicode support takes 3KB, no less, and that's memory that is needed for more interesting features (such as the ones included in this update). Of course, if you loved Unicode so much that you can't live without it, I strongly recommend you do NOT update :p


New "Front" and "Scarce" buttons on the "Screen" menu 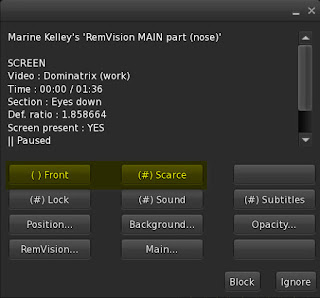 Before this update, the RemVision screen was always in front of all the other HUDs the sub may be wearing. This was on purpose to force her to watch whatever movie you want her to watch. But this was a bit too strict and was getting in the way more often than it was useful. Now with the "Front" switch, you can decide whether the screen goes to the front like before, or before any other HUD so it doesn't get in the way. The default is back now.

When the "Scarce" switch is on, the screen shows itself only 25% of the time (instead of all the time) whenever a new image is displayed. I may or may not add more control later over the probability of showing the screen but for now it is 25% (when on) or 100% (when off, which is the default). 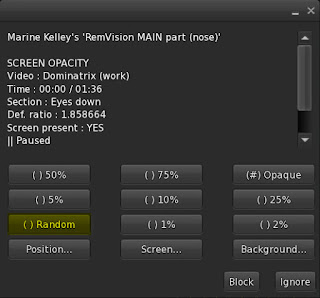 This button makes the screen (and its background) take a random opacity between 1% and 100% every time the picture changes, with a slight bias towards 100%. 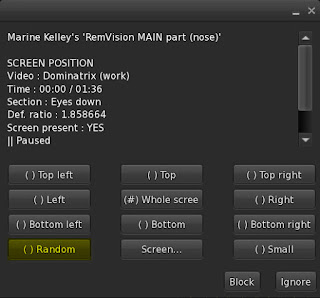 This button makes it so the screen takes a random position on the sub's view every time a new picture is displayed, with a slight bias towards "Whole screen". It does NOT change the size though, which stays the one you selected with the "Small" switch. 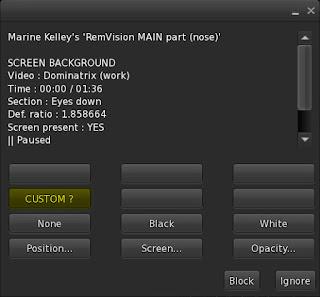 You can now specify your own background by entering the UUID of the texture you want. To get the UUID of the texture from your inventory, provided it is full-perms for you, simply right-click on it and select "Copy Asset UUID", which will copy the UUID to your clipboard, and you will be able to paste it in the text box that shows when you press "Custom" in the Background menu.


Optimized the memory in the plugin and the screen

I heard about the screen crashing in certain circumstances, so I optimized it a bit more to protect it against crashes better. Hopefully this time it won't crash anymore (those who had the problem didn't report any crash after testing the change, at least).


Shuffle when reaching the end of the tape

When you have made the playlist random (in the Sections menu) and the end of the tape is reached and when in "loop" mode, RemVision will re-shuffle the playlist so the sub does not see the exact same pictures in the exact same order again, making it truly random without risking to see the same sections too often (since a random playlist features each section only once). Of course, if the last section before the end of the playlist ends up being the first one after being re-shuffled, the sub will see the same section twice in a row, but I can't avoid that.


Changes to the Earpieces plugin

The Earpieces plugin is reachable either through the plugins list or from the RemVision plugin. It used to be exactly the same as the Hood plugin of the Isolation Hood, but it has evolved quite a bit in this update (I'm considering porting the new features to the hood as well later).

New buttons in the menu 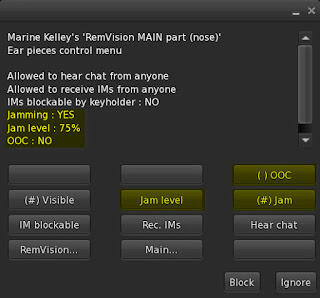 Until now, when you pressed "Hear chat", the sub (who had to be a RLV user naturally) couldn't hear anything said on the chat at all, only emotes. However, a lot of people embed emotes into chat, and chat into emotes. For example :

Now if the "Jam" button is on (which it is by default), instead of seeing "...", the sub will see something like :

The "Jam level" button goes from 25% to 100% with a step of 25% every time you click on it (it is 75% by default), which means that roughly each letter outside an emote has as many chances of being replaced.

Of course, if you don't want your sub to hear anything at all, even emotes embedded in chat, switch "Jam" to off and it will behave like before.

I strongly suggest turning "Show '...'" off in the RLV menu of your viewer.


To update your restraint and benefit from this fix, you need to go to one of these locations :


Once there, click on the updater and follow the instructions. You need to choose "REPLACE". Don't forget to save your times before requesting a replacement. If you do not get a "REPLACE" option, contact me (Marine Kelley) to get a manual replacement.

Posted by Marine Kelley at 8:42 AM